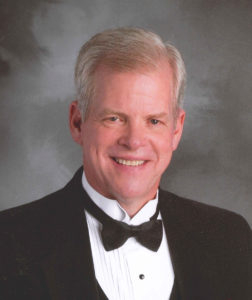 Director of the Tucson Arizona Boys Chorus since 1980, Julian Ackerley has achieved national and international acclaim as an accomplished conductor and administrator of choral organizations. He received his Doctor of Musical Arts degree from the University of Arizona with special emphasis in music education, vocal performance and choral conducting. His many successes include national and international tours, numerous critically acclaimed recordings, collaborations with national symphony orchestras and opera companies, and increased fiscal stability for the Chorus. He is an experienced teacher having taught at all levels, elementary to college, prior to his appointment with the Boys Chorus.

In addition to serving as Director of the Tucson Arizona Boys Chorus, Dr. Ackerley recently held two terms as the National Boychoir Repertoire and Standards Chair for the American Choral Directors Association and is a specialist in working with boys’ emerging voices. He was selected Choral Director of the Year in 2012 by the ACDA Arizona Chapter. Dr. Ackerley was chosen to be the Associate Conductor of the International Children’s Festival Chorus and Conductor of the American Youth Choir, a national honor choir of both boy and girl singers. As AYC conductor from its inception in 1999, Dr. Ackerley has conducted in international festivals in China, Mexico, South America and Europe. He served as Vice President of the International Society for Children’s Choral and Performing Arts (ISCCPA), and as a board member for The Alliance For Arts and Understanding (AFAU) which is the umbrella organization for the AmericaFest Festivals. Other professional affiliations include the Music Educators National Conference (MENC) and Phi Mu Alpha Sinfonia music fraternity.

Dr. Ackerley often serves as a clinician and guest conductor at numerous choral festivals and All-State Choirs. Most recently he conducted the ACDA Middle School Boys Honor Choir in Cincinnati. In addition, Dr. Ackerley was the conductor clinician at the 5th Biennial Boychoir and Young Men’s Festival in Salem, Oregon and at the Children’s Universal Music Festival in Fort Worth, Texas. He was also an invited clinician for the Conductor’s Symposium at AmericaFest, the internationally renowned festival held at St. John’s University in Minnesota.

Under Dr. Ackerley’s direction, the Tucson Arizona Boys Chorus has flourished. He instills in his singers the importance of their responsibilities to the Chorus team and surrounding community. The performances showcase the power of his comprehensive music program, administered with a caring hand while demanding the highest level of musicianship and discipline. Dr. Ackerley’s dedication to artistic quality and the wellbeing of his choristers has been essential in building the successful reputation of the Tucson Arizona Boys Chorus.